::CAUTION::
My mom took lots of pictures.
Mom and dad got home from work yesterday and got out my travel bag!  I was SO excited to be going somewhere, but I wasn't sure where we were heading.  We loaded up the firebird and off we went!  That's when I noticed mom brought along my lifejacket... hm, wonder where we could possibly be heading!  Can't be the lake, because it's a weekday!  I decided I was just going to enjoy the ride...
Ladies, I've got the driving thing down, so let me know and I'll come pick you up, we can cruise around in dads my firebird.  I'll bring some treats and we can have a picnic, sound good?

Dad said something about the boat leaking gas, so we had to go up and burn some.  It was super hot out, so any excuse to take a boat ride was fine by us!

It was a short trip because we got up there so late because the pawents had to do the work thing.  But it was definitely worth it!  When we got back to the dock there were two other doggies for me to play with!  Well, one of them was older and didn't want to play with me, but Gracie was a few months older than me, and after she convinced me that she was much cooler than her sister, I decided to give it a go!  We had a great time playing, but I wasn't sure why we were staying so long and not heading home... 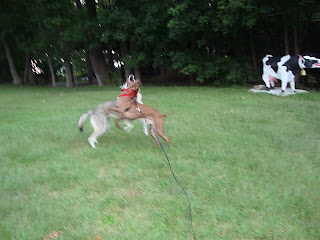 While we waited for Grandpaw Jack to come pick us up, mom and dad went to get pizza.  I quickly became the newest tourist attraction at Lake George!  I met lots of cool new people and kids!  Mom kept saying how proud she was of me.  Kids scare me a bit and mom thinks my first home had little kids that hit me and tugged on my tail and ears... I keep telling her I blocked all of that stuff out and don't remember any of it, but she says that it still might effect me subconsciencely.  Whatever that means... She gave the kids lots of treats to give me... as long as kids have treats, I love them!  She said it was some steps in the correct direction.  Whatever, dude.  I was happy to see Grandpaw Jack when he got there, but soon fell asleep on moms lap for the ride home.  I was super tired!!!!