So, some of you might have noticed that I was missing from Blogland on Tuesday.  Here's why... and I suppose I should provide you with a little background information.  My mom has always been an animal lover... all sizes and shapes, furs and hairs.  When she was 8, she finally pestered convinced Grandma Lynda to take her for horseback riding lessons.  Well, she was hooked and has been riding ever since.  When she was 20, she met and fell in love with a black 4 year old appedix mare named Kahlua.

She became very close with Kahlua's parents, Tamara and Dave, who she began calling her "big brother and big sister" -- of course, they're now my Aunt Tam and Uncle Dave.  Kahlua was a crazy horse with lots of energy, but my momma loved her and rode her for 3-4 years, then Kahlua got hurt.  They were never too sure what happened, but she kept coming up lame on one of her front legs.  Mom was very sad, but September 2007 they found her a new home.  She went to a breeding farm in Virgina to be a mommy!  Ever since she left, mom was very sad and missed her terribly.  Kahlua was a huge part of her life and she felt incomplete without her around.  She's a beautiful horse and her and my mom had a great bond.
﻿﻿
﻿﻿
So, bringing us to more recent events, about 3 months ago, Aunt Tam received a phone call from Kahlua's Virgina mom.  She said she was trying to decrease her herd and wanted to know if they wanted Kahlua back.  DUH! Of COURSE they did!  So Aunt Tam and Mom made some phone calls and finally found a friend of theirs, Miss. Kate, who was interested in taking Kahlua.  Mom was beside herself with joy.  As luck would have it, the weather was over 100 degrees for a good part of the summer and it was too hot to trailer Kahlua up north.  So all summer mom was on pins and needles waiting for the phone call that Kahlua would be heading up.  Finally, last week, they got it!  And Aunt Tam and Mom were heading to New Jersey to meet them half way!  That's where Mom was last Tuesday.  She was so happy to be reuinited with her horsey love and so happy that she was going to be local again and mom could go see her whenever she wanted! 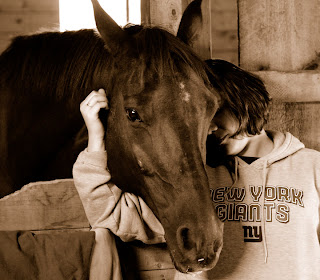 I haven't met Kahlua yet... I really don't like those large dogs with hard feet and I bark at them a lot.  So, I promised mom I would try really hard to be calm around them. We'll see how that goes.  For now, I have to give up some of my time with mom so she can go visit Kahlua.  It's a bummer, but I still have my dad!

Anyway, just thought I'd update ya!  Hope everyone is having a great week!
Posted by Corbin at 11:03 AM