With Diva Serena adopted, it left my house open for another foster kid!  So, the momma brought home a little girl named Amelia. 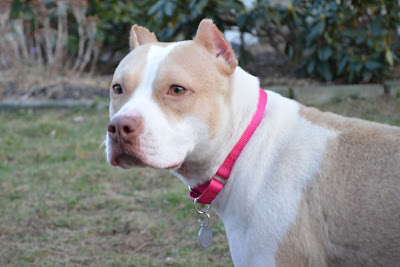 Meet Amelia.
Now, I know Serena was beautiful in her own fluffy way... but Amelia?  Oh, come on!  The Corbin is in loooooooove.  The momma said I'm just a breed snob, but I can't help it if I didn't care for all that fluffy whiteness on my tongue!  Serena and I got along good enough, but I looooooove Amelia.  Like love her, love her.
I. Love. Her. Blockyheaded. Smoochie. Face. 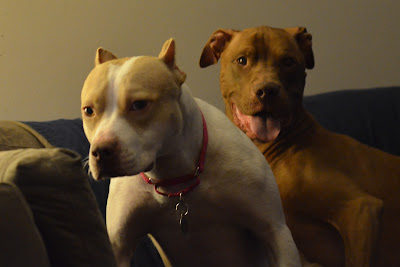 1 very smitten Corbin.
Now, I do have my work cut out for me with my dearest Amelia.  She seems to be about my age, maybe a tad bit younger, 2-3 years old maybe.  But, my little love muffin is a little nervous, scared and sometimes fearful being in the house.  It took us all weekend to get her all good and comfy coming in and out of the house because doorways were a bit scary for her.  However, I think getting that accomplished in less than 48 hours is a HUGE step for her!  She hesitates a little, still, but she's so smart and learning to trust the momma and the dad, which makes it easier for me to teach her things because they get to help. 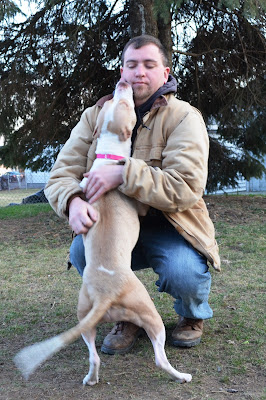 She smoochies my dad.
Amelia believes that a big scary monster lives in the hallway.  I told her that's not the case in my house, but she just doesn't believe me.  So, I told the momma to get out lots of yummy treats so we can lure her into the hallway where she can see for herself that no monsters exist!  Can you believe that no amounts of cheeses, peanut butters or chickens will get her down that hallway?!  It just may take a bit longer than the doorway, but we're up for the challenge!  Until then, she's very happy on the couch. 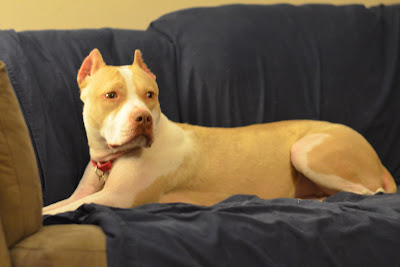 Can you believe I have another couch loving foster sister?!
Aside from Lady A's household fears, she's a super wonderful gal.  She really loves the momma and the dad, and of course, the Corbin.  She plays in the back yard and she's slowly getting over another fear she has of the leash and walkies.  I'm amazed at how well she has done in such a short period of time, I just know I'll win her trust and have her prancing around like she owns the place in no time! 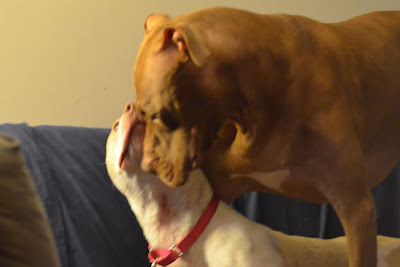 Loves the Corbin.
We don't know much about Amelia's past... she's been at the shelter for a long time, and was adopted out at one point but returned because she got into the trash.  She hasn't shown any interest in the trash and we think the people who adopted her just weren't up for the challenge of making her comfortable in the house.  Either way, her time was up at the shelter and so many people cared about her they made lots of phone calls and landed the momma's number.  Now, the momma had been talking to a family who met Serena last week, so she was pretty sure Serena would have her forever home, so she took the risk and said Yes to Amelia.  I mean, how to you say no to that adorable face?!  Amelia came all the way from Kentucky as a last minute add on to a transport already headed to us.  Lots of people came together to make sure Amelia was safe, and we sure know why.  She's a little love bugger! 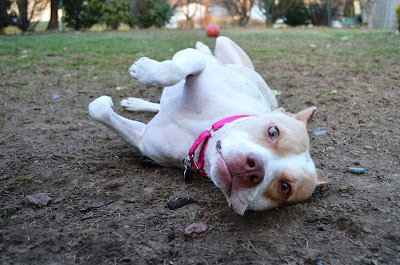 "Who, me?"
Amelia's ears seem to have been cropped in at at home attempt with scissors.  They're uneven and jagged, but she doesn't seem to mind them getting massages.  She's super snuggly and really loves her place on my couch.  We're not concentrating on what we don't know about her past, instead, we're moving forward with what we do know about her future.  She's safe, loved, smart and slowly trusting that this life is all it should be.... wonderful.
Posted by Corbin at 3:07 AM