Two weeks ago, I put my heart on my sleeve, bit my tongue and decided to tell you all what a crummy Corbin momma I've been.  Our training this past year has pretty much been non existent and because of it, Corbin has been getting a bit out of control.  We told you a few things that we were going to do to alter our routine to better suit Corbin, and here's how we're doing, and the obstacles we've encountered. 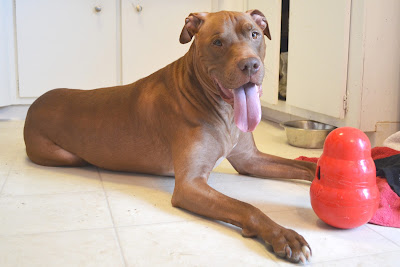 What to you mean my food is in there?
This doesn't look like my food bowl.

One of the things I mentioned was purchasing a Kong Wobbler for Corbin to get his dinner out of.  I was so excited to introduce this fun food puzzle/toy and see how he reacted.  Well... as I should have assumed, Corbin grabbed the wobbler in the clutches of his jaws and hurled it into our wall.  FAIL.  Corbin: 1, Momma: 0 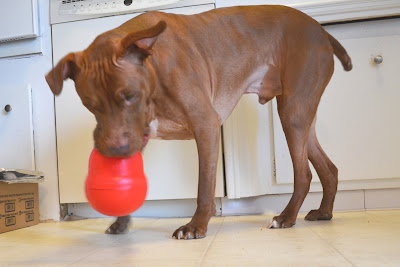 You see, this trick worked when we first got Corbin and gave him only dry treats in a Kong.  As he navigated the Kong, he realized that treats fell out when he dropped it... so he raised the bar and launched it into the wall, causing treats to explode out of it.  Wish I knew then what I know now... but we eventually got over that phase as I learned about freezing and he learned about licking.  But, oh my... could have saved a lot of wall dents with better strategies. 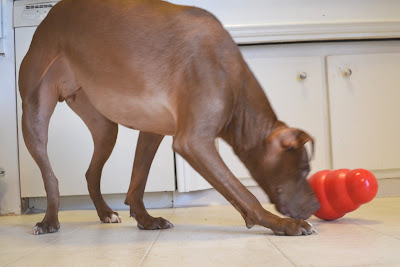 It's not a Kong Launcher?  I have to Wobble it?  Like this?

So, how did we fix this?  Before he threw it into the wall, he did use it correctly for about 2 minutes.  Once it made contact with the wall, no more wobbler.  The next day I decided to bring it down a notch.  Corbin received half of his dinner in his food bowl, then the other half in the wobbler.  This way he wasn't so hungry and would spend more time concentrating on the idea.  We got half way through the wobbler before he grabbed it and prepared to launch.  I quickly intervened, said "all done" and took it away.  No more wobbler for Corbin that night.  We've been doing this every night and Corbin makes it a little longer before the launching idea surfaces.  He's never left unattended with the wobbler, for many reasons including the safety of my walls, oven and sliding glass door. 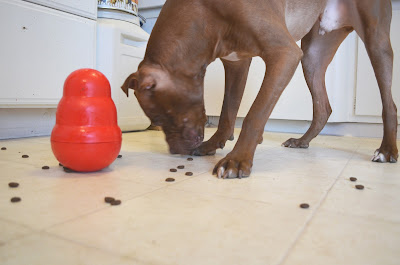 WOAH MOMMA!  If I get a good spin on the Wobblin'...
FOOD EVERYWHERE! SCORE!

Our friends at Love and a Six Foot Leash proposed a challenge to take your dog to a different area for training.  We agree!  In compliance with our training, and our commitment to the Doodlebug Challenge, we've taken Corbin to our locally owned Pet Store for some training... It was a great place to work on Corbin's focus with other dogs around.  We worked on Corbin's sit/stays and down/stays and his reactiveness (barking, growling/grumbling) when unknown dogs are too close.  He did fantastic, shown by his side tongue hang.  That's always a good sign of a tired Corbin. 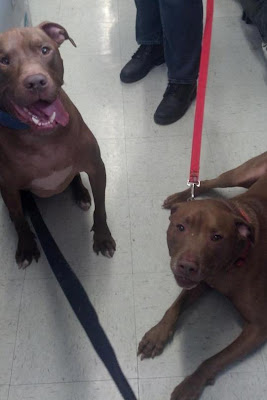 I'm so tired, I can't keep my tongue in my mouth.

We've also gone on a few walks outside of our neighborhood with different distractions.  Corbin walks fantastic on the leash when there are zero distractions.  However, we went to the Crossings for a stroll, where there are lots of other dogs, runners, people, kids, etc.  He gets very antsy and anxious.  Really, he just whines and grunts a lot.  He still walks next to me on a loose leash, but he vocalizes how difficult it is for him to concentrate on me while all these other things are going on.  The grunting cracks me up, but I ignore it and reward him when he goes a few steps with no noises.  Silly dog. 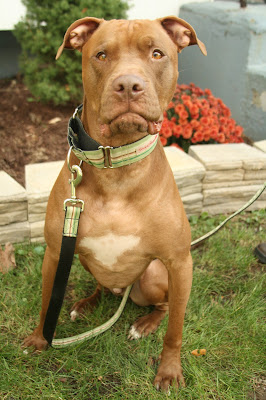 Walking in our own neighborhood has also picked up, and last week we were able to walk with our neighbors, their 2 dogs an their toddler in a stroller.  All super exciting things for Corbin.  He walked so perfectly to their house, then it was grunting and whining like a crazy dog.  But, his grunts were less by the end of our walk - so, I'll take that as a success.  Can't wait for our next walk to see how our progress continues!

I was SO excited to introduce some fun food puzzles.  Our friend Athena from Pitlandia recently blogged about some fun and interesting Easter themed food hunts and food puzzles.  So, I went out and bought 10 bags of Easter eggs from Walmart at half off.  Then, we attempted the Easter Egg Hunt.  I put some of Corbin's favorite treats inside the egg and let him open it up -started easy.  Then I let him sit on the couch while I hid the treat filled eggs around the house.  He got so excited, ran up to his first egg and wanted that treat so bad he cracked the egg into 9 pieces.  None were swallowed, but this wasn't going to be a game that we'd be able to continue doing... FAIL.  Corbin: 2, Momma: 0. 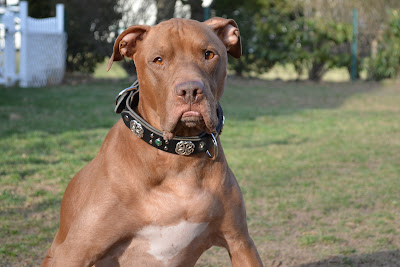 No picture of our fun attempt at food games.  The momma
and I have different ideas on how they should be played.

Then, we decided to try another fun food puzzle from Athena... where you put treats in a muffin tin and cover them with half a plastic egg.  The idea is that the dog will use their nose to uncover the treats.  Well, not my dog.  Corbin took one sniff and landed his giant paw on the muffin tin, causing it, and the treats, to fly through the air.  Treats everywhere.  FAIL.  Corbin: 3, Momma: 0. 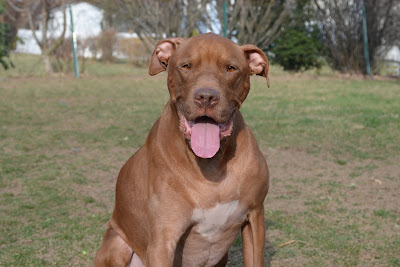 I think my trainings are going rather well, no?

The last food puzzle we changed up was his regular Kong.  With the increased treats during training, I decided to put about a quarter of his food in his Kong mixed with veggies and frozen.  This way, he still got a Kong every morning, but it wasn't really increasing his daily calorie in take.  He gets that in his crate every morning when I leave for work.  I trust Corbin enough with the Kong to leave it with him unattended.  It's one of the only things I trust with him unattended.  Some nights if he still has energy after all of our days work, he'll get a second Kong, but I've found a few things that make his Kong eating a little more difficult.  Again, our friends at Pitlandia come to the rescue.  The posted a great recipe for frozen delights using a silicon bunny shaped mold -which I got half off after Easter.  These little bunnies can be stuffed in the Kong... which makes Corbin's task a little more difficult, since it's not just licking mindlessly, it's a little bunny bouncing around inside the Kong that he needs to constantly find and lick.  This also works with yummy things put in ice cube trays, which I might start doing with his breakfast Kong.  One of Corbin's favorite things is a Natural Balance food log.  Since Natural Balance is the brand of dog food we use for him, I like their line of foods.  The food log can be cut into any shape or size... so I cut the log, squeeze the Kong so I can fit it in there and let Corbin go to town.  Again, it's a little more mind provoking that just letting him lick, lick, lick.

Where do we go from here?

I just ordered Corbin a back pack from Outward Hound, it's his early birthday present.  No matter how far we walk, how many times he fetches the ball or how many mental games we play, he still seems to have energy now that his back feels good.  So, hopefully he can carry his own water bottles and give him more of a purpose to his walking, or just tire him out a bit more. 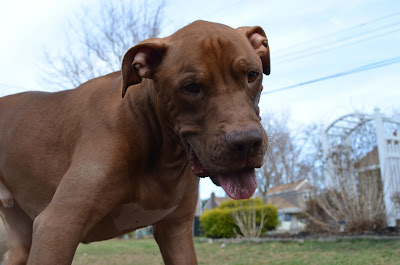 Also ordered a Chuckit!  Ordered two actually, the original one and a travel one!  And, a new 50ft lead, because our 30ft lead never seems long enough when we play at the dog beach.  Corbin isn't trusted allowed off leash because he likes to wander, not listen and cross roads.  But, that's a feat for another day!
Posted by Corbin at 4:08 AM