The Cone of Shame

The Cone of Shame will now be entered into the Corbin Hall of Fame: Destruction Section.
Details below. 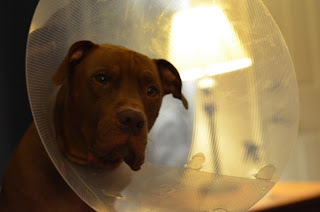 
So, that's my cone.  The momma put it on me on Saturday and I kept getting it off.  So, she wrapped it around my collar, and I still got it off.  Finally, she out smarted the Corbin (or so she thought), and had it good and tight so I couldn't get it over my head.  I got noms every time I was good and calm in my collar and not karate chopping it off of my head. 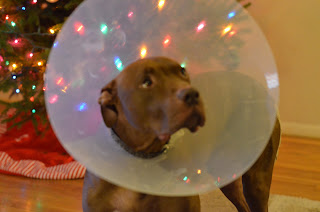 Dad wouldn't even help me.
Dude, with the stupid inside tree behind me, I look like I'm lit up.
So, they made me spend a little time in my stupid cone every day hoping I would get used to it.  Seriously?  How would YOU feel, momma, if I put a lamp shade on YOUR head?!  Anyway, so the momma attempted to go to work for a few hours on Monday.  She put my cone on, gave me noms and put me in my crate (which we had also previously practiced in my cone).  When the momma came home, do you know what she found? 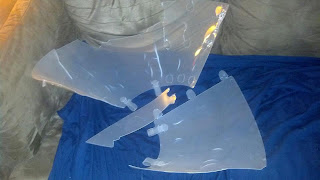 Yep.  The Corbin fixed that stupid piece of dog doo.
The momma seemed a little upset, so she suggested a car ride - that always makes me feel better, so I figured she was trying to cheer herself up.  So, off we went on an adventure.  We arrived at PetSmart, who suggested a thing that blows up around my neck.  You have no idea the danger this crazy momma was putting the Corbin in.  Something that blows up?!  Near my neck?!  Come on! 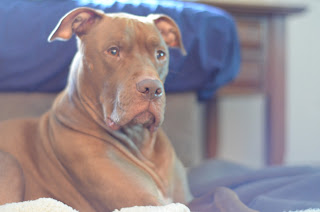 The momma didn't snap pictures during our adventure.
So, this is just me looking handsome after my surgeries.
Well, it was explained to me that it doesn't actually blow up, as in explode.  It inflates with air.  Still, stupid.  On went this inflatable thing, and inflate it did.  The momma paid for it and off we went back to the car.  Dontcha know, we didn't even get out of that parking lot before I had that thing really explode?  I popped it!  POP! 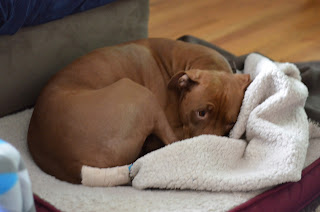 I told her "blow up" was never a good phrase.
The momma was glad they gladly returned it for her, and they laughed and said they had never heard of that before.  Then I got some good scratches while people told me I was smart.  Back in the car we went... this time we went to the PetCo.  They had foam flexible ecollars, the momma was skeptical, but willing to give it a go.  She paid the green papers and off we went for home.  I had that thing figured out in seconds and was able to nom on my tail. 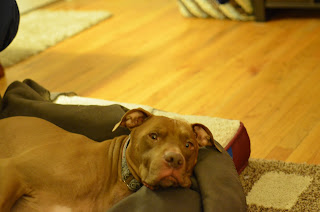 I think you'll just have to stay home with me every day, momma.
Every. Day.
So, the momma pulled out the big guns and called the VET.  They said I'd have to go in to get fitted for their last resort.  Back in the car we went.  Would you believe that they had a NECK BRACE for me to wear?!  For real, neck brace.  Like for dogs with broken necks.  I said, Lady.... I ain't got no broken neck.  You crazy. 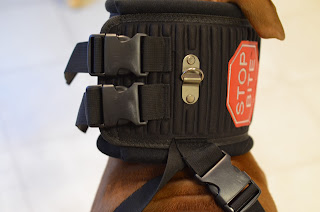 Look at this thing!!!!!!
The momma took me and my new neck brace home.  What dummies, why do I need a neck brace if I don't have a broken neck!?  The momma said it's because if I get to my tail and do any damage, SHE might break my neck, so this is a preventative measure. 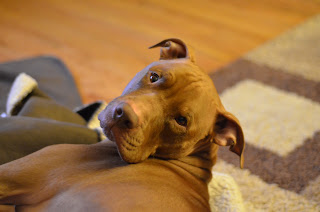 You're bluffing, woman.
So, she left for the work place this morning again, and will come home and check on me in a few hours.  She said I was in big trouble if I had this thing off and she better come home to find me snoozin' in my crate. 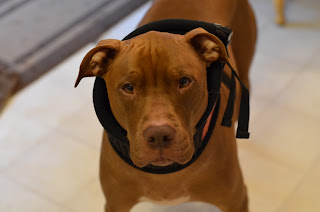 Challenge accepted.
Posted by Corbin at 7:09 AM