Ok, I haven't talked about my health in a while, mostly because there hasn't been much to report. I'm still on my prednisone 5mg every other day.  We've tried stopping it twice, but my ouchies come back.  Then the momma tried every 3 days, but after 2 weeks, my ouchies returned.  So, I'm still on it every other day and I guess that's okay.  I've regained all my muscle and the 5mg doesn't seem to have a negative effect on me. 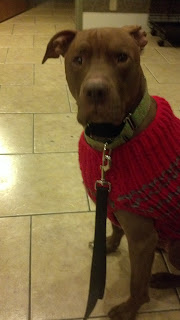 Do you think Dr. Mike missed me?

So, last night I was 30 days overdue due for some shots.  The momma made an appointment with Dr. Mike and off we went.  Now, usually when I get to the vets office, I'm greeted by my girlfriend, Amber.  She comes out and ohhhhs and ahhhhs over me and smoochies me and tells me how handsome I am.  I was waiting and waiting and waiting and she didn't come.  I was really nervous, but the momma said she must not be working.  Bummer.  Then, my OTHER girlfriend, Jamie, usually comes to get us from the waiting room and brings us to the Dr. Mike room.  Dontcha know, she didn't do that?!  What is going on with this world? 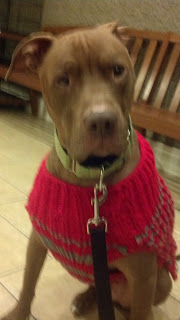 Where the heck are my girlfriends?
And, why am I so blurry????

The momma and I went into our room and the non-Jamie lady took my weight.  A handsome 74lbs.  She gave me a cookie, so she was okay.  I missed Dr. Mike SO much I didn't even growl when he came in like I usually do.  I let him feel me and touch me and poke me all over.  The momma told him how my ears have been a bit icky, but other than that, I seem to be A-OK!  Well, that's not what Dr. Mike found. 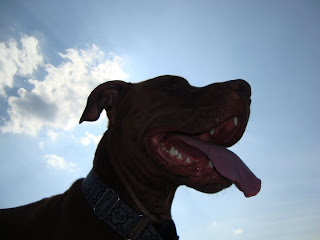 Remember how I have really nice teethies?  The momma brushes them and I chew my bones to keep them in tip top shape?  Well, I do.  Except the momma has pretty much been super busy and hasn't been brushing my teethies at all as often.  Well, in the above picture of my handsome teethies... do you see that BIG toothie on the bottom to the left?  There's a matching one on top but it's covered by my smoochie lips.  That matching toothie up on top went and BROKE off!  Can you believe it?  The whole thing, broken.  Dr. Mike said the nerve was exposed and we had to remove it as soon as we can so it doesn't abscess.  THEN... yea, there's a THEN.  THEN, Dr. Mike found that when I broke my toothie, it caused the rest of my teethies to shift, causing my back molar toothie to crack and now it's SUPER infected.  Ugh.  Dr. Mike said I must have chewed on something super hard to break it and that it didn't have anything to do with my lack of teethie brussings. 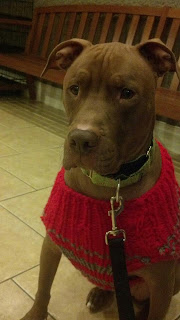 So, on Monday, the momma has to drop me off at the vets.  I have to have a follow up Heart Ultrasound to make sure my heart either isn't enlarged anymore (we're hoping for this one!) or the medications are controlling my enlarged heart.  As long as my heart is okay, then we schedule my surgery to remove my teethies.

On a better note, as I was leaving the Dr. Mike room, I heard a familiar voice say "Is that Corbin butt?!"  It was my girlfriend Jamie!  She caught me just in the nick of time, I almost left without seeing her!  So, she came over and gave me smoochies and scratches and I whispered in her ear that I'd be back on Monday.  She said she'd be there ALL day on Monday and give me lots of extra snuggles and smoochies.  THEN!  My other girlfriend, Amber appeared over the counter when the momma was giving all of her green papers away!  So, Amber came and gave me smoochies and scratches.  Then the other girls wanted to be Corbin girlfriends too, so they came over to introduce themselves, but... two girlfriends is a lot to keep track of, so I grumbled and barked at them until they gave me milkybones, then they got smoochies too.  Now, I have lots of girlfriends at the vets office!  And, they'll all be there on Monday, so I'll be in good hands with my girlfriends and Dr. Mike! 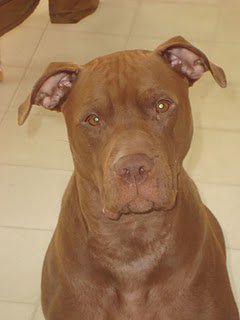 You were all hoping for a better health post, huh?
Maybe someday I'll have a clean bill of health!
By the way, we've still never figured out what's causing the ouchies... it's still quite the mystery problem!
Posted by Corbin at 6:55 AM