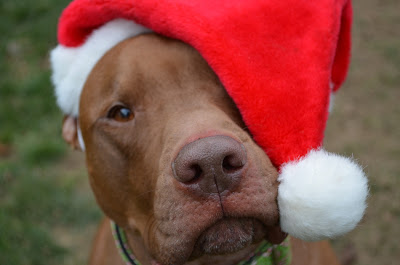 Corbin and I sure do hope everyone had a wonderful holiday!
In preparation for Christmas Eve dinner at Adam's grandmother's house, we gave Corbin the tranquillizers and some pain medications about 45 minutes before we left, so they had time to kick in.  By the time we were ready to leave, we led a drunk, wobbly Corbin to his crate, neck brace and all.  We enjoyed our night and came home a few hours later.
What did we find when we got home?
A drunk, wobbly Corbin... with no neck brace, no tail wrap, no staples and lots of blood.  So, off we went to the emergency vet, where we spent the remaining hour of Christmas Eve and the first two and a half hours of Christmas day.
The emergency vet agreed with what Dr. Mike had told us on Sunday... that if Corbin got to the staples, another surgery would be required to remove an additional part of his tail for a fresh area to work with since he's damaged the previous site so badly.  So, she re-wrapped it and spent some time discussing some other options for us, such as medications and other preventative ways to keep him from his tail. 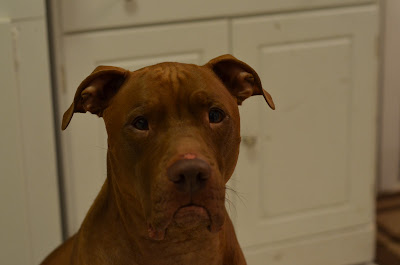 I sent Dr. Mike and email on Christmas updating him on our Christmas Eve adventure.  He had taken this week off to visit family out of the area, so I asked if there was another vet that he recommended we see, since Dr. Gordon also knows Corbin pretty well.  But, his dog became ill Christmas Eve, and while she was on the mend, she was too weak to travel, so his vacation turned into a staycation.  My amazing vet is so dedicated and cares so much about Corbin, he went in this morning to do Corbin's surgery.
So, that's where the monkey dog is today... he's hanging out with Dr. Mike and having more of his tail removed.  We had decreased one of his heart medications last week, in hopes he'll be stable on a lower dose.  His heart sounded good and strong today, but I'm still nervous.  I know he's in great hands, but a few extra prayers and good thoughts would do us good! 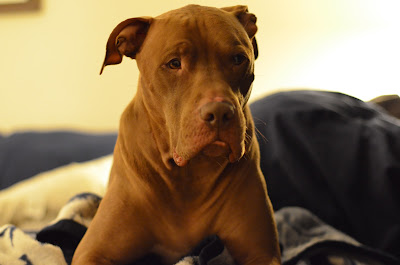 Adam and I will be taking time off from work to stay with Corbin, so he's not left alone to destroy his tail again.  However, if we do need to leave him, he will be wearing his neck brace, a basket muzzle, and boots on his paws so he can't get the leverage with his paws and nails to get the neck brace off.  We'll also have him on tranquillizers, nerve blocks and pain medications to keep him comfortable.  It's going to be a long couple of weeks.  And, although I know this is best, in theory, in the long run for Corbin... I'm kicking myself for amputating his tail :-(  I feel so bad for my poor boy and can't wait until the healing process is over.
We'll update on facebook when he's out of surgery and will be back tomorrow with an update.
Posted by Corbin at 7:34 AM