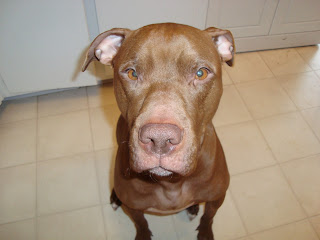 Ok, well not terribly wordy.
But, some friends have been asking for an update on my ouchies.  Still, no one knows what's wrong with me.  All we know is that the pictures of my internals all look good and I was still in pain.  Since the Prednisone cream cheese worked previously to relieve my ouchies... I'm back on it.  Mr. Dr. Mike is hoping that a more aggressive treatment of it will hopefully knock out whatever is causing the pain.  So, I'm on it the Prednisone cream cheeses twice a day for 8 weeks, then I start the weening process.  I've been ouchie free for a week now, but I'm still on restricted activities... although mom and dad have been sneaking in some short walkies to keep me happy.
Dad noticed a bump where my belly connects to my leg... so I'm going to see Mr. Dr. Mike at the V-E-T-S tomorrow to check it out.  The momma says it could be something as silly as a buggie bite -because sometimes I have weird reactions to them -or it could be a cyst or tumor... she doesn't think it feels like a buggie bite, so we'll see with Dr. Mike has to say.  Maybe that's been the cause of my ouchies all along!  Although, I'm sure someone would have felt it before now... but who knows, right? 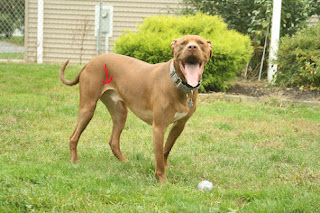 See the arrow?  That's where my bumpy is...
and this is an old picture.
Back when I could play fetch.
So, that's my update.  If we find anything out on Thursday or Friday, we'll be sure to update you.... but more than likely, we might not have an answer until next week.  And, next week I won't be around the blogville's much.  I'm going to make up some posties to post while I'm not around so y'all don't forget me, but I won't be able to update them with bumpy news.  But, I'll be sure to update you the following week if anything happens.  Sound good?  Eh, I know.... but it's the best I can do! 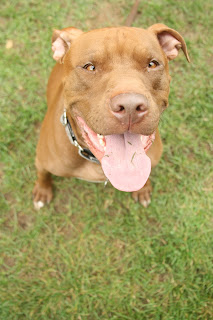