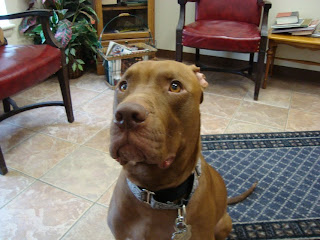 What do you mean you're leaving me here?????
Corbin's momma here... just left Corbin at the Vet Specialists for an MRI. Hopefully we'll have some answers in a few hours. But we have the neurologist stumped. During his exam, of course, Corbin was showing no signs of pain. The only time he yelped was when Dr. Bishop (neurologist) examined a muscle that connects from the back to the leg, near the ACL. So, he took Corbin over to see the orthopedic, who found instability in both of his ACLs. Now, when we adopted Corbin we knew of a few pre-existing conditions. He had his hind right leg broken when he was 8 weeks old and has pins there. He also developed some ACL issues with his hind left leg while at the shelter. He was checked out by a specialist before he even met us, and Dr. Glennon (ACL specialist) said it was something he would most likely grow out of. For the most part, he hasn't had any issues. Once in a while he would yelp and hold his leg up while playing in the back yard, so we put him on Glycloflex and he's been fine ever since.

Anyway... After consulting with the orthopedic, Dr. Bishop discussed our options with me. We could do the MRI to rule out any back issue - although, he didn't believe it was a back problem. Or we could skip the MRI and do x-rays on his hind legs and try to figure out what's going on there. I was pretty uncomfortable making the decision, as I'm pretty sure something is going on in his back... so I called Dr. Mike (at home, God bless him!), and Dr. Mike talked to Dr. Bishop and also said from what he has seen in Corbin, he also believes it's something going on in his back. Dr. Mike has seen Corbin since he was still our foster dog -as I was worried about his leg issues before adopting him. So Mike knows everything there is to know about Corbin's history and would know if this was a leg issue.

Dr. Bishop did agree that a leg issue wouldn't be causing Corbin to hunch over in his back. So, I left him with the vets for the MRI of his back and neck, while he's under, we're also going to have x-rays of his legs done to see if there are any changes since the x-rays taken when he was 6 months.

The MRIs will take about 2.5 hours, plus an hour prepping before the MRI and time for him to come out of the anesthesia. So, I'll get a phone call when he's ready and we'll meet with Dr. Bishop to go over the MRI. Hopefully we'll get to the root of whatever is bothering him and get him all fixed up soon...

I'll try to update tonight after our appointment, but I might not get a chance to update until tomorrow morning... either way, I'll let you know!

Thanks for all of the support... it's been a really hard 2 months and we appreciate every single crossed paw, prayer and words of support!!!!!
Posted by Corbin at 9:35 AM