Black Bear in my house!

Dude, this past weekend there was a black bear in my house... IN MY HOUSE!
Mom kept telling me that it wasn't a black bear... and that it was in fact a Bernoodle (Bernese Mountain Dog/Poodle) and his name was Yukon.  Now... I know my mom can be a little crazy, but I think this time she went over the deep end... that's definitely a black bear. 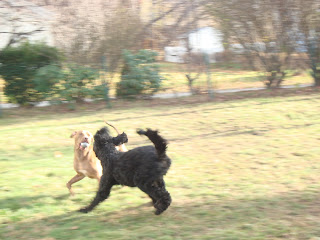 BUT... I'm trying to stay on Santa's nice list... so I entertained the big guy.  This isn't a foster dude, he's one of mom's pet sitting pups.  She brought him over for some play time while she had him.
﻿ 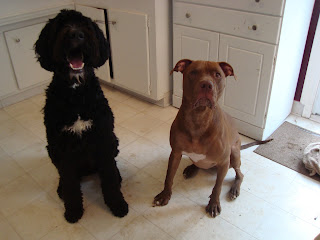 In all seriousness... we did get along really well and it was fun to have someone to play with since I haven't had a foster sister since Halloween when HannahBrindleBrat was here!  And, btw, her new name is Ruby and she's attending the same doggie day care that I will be going to!  So hopefully I get to play with her some more in the future.

AND!!!  I wanted to update everyone on the other two dogs I featured during Mayzie's Adopt Me Week!  Max was adopted!!!!!!!  Everyone at the rescue was so happy... Max had been through so much and really deserved a great home, and boy did he get one!  And also, my buddy Levi over at Two Pitties in the City was also adopted!  So, it's official... all 4 dogs that I posted about were adopted!!!! YAY!

I sure do hope everyone had a wonderful Thanksgiving!!!  We sure did... we have a lot to be Thankful for and mom was so happy to be surrounded by all of her family!  I was thankful for the left overs ;-)
Posted by Corbin at 1:27 AM