I've always wanted to join in on the "5 Things I'm Thankful for Friday."  We usually have a foster dog to chat about or something else comes up...  But, today I'm very thankful for one thing.  I'm thankful for the life of my dad and my Uncle George.

Wednesday night, my Giants were playing the Dallas Cowboys to kick off football season.  Since my Giants won the Superbowl earlier this year, the game was hosted in their stadium and my dad really wanted to go.  So did the momma, but she let dad go with Uncle George.  The game was less than what any Giants fan would have hoped for, so dad and Uncle George left the game less than happy.

Then, 3am came and I was sleeping in bed with the momma waiting for dad to get home, only that instead of hearing him at the door, I heard him through the momma's phone.  Dad and Uncle George were in a really bad car accident on their way home.  Dad assured mom that both were ok, but heading to the hospital.  So, the momma went to pick up Grandma Laura and they met dad and Uncle George at the hospital.  The momma made the human vets check out dad, although he kept telling her he was fine.  They did an ultrasound and xrays to see his insides, and said he was okay and just to rest.  Uncle George got the full workover by the human vets... he had a deep cut on his left arm, but other than that, he was okay too.

After 6 hours at the hospital and a few hours of rest, the momma drove dad to where the car was, about an hour from our house.  From the looks of the car, it was hard to believe anyone survived, let alone walked away from the scene. 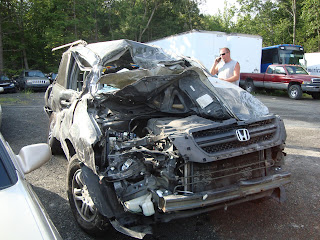 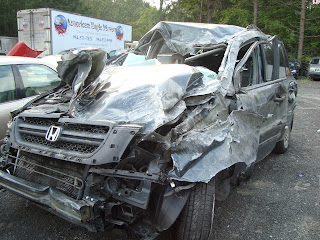 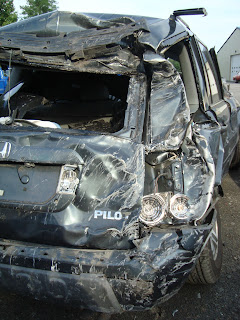 I'm so thankful to have my dad here with me.  I'm thankful he only has a few scratches and a bump on his head.  I'm thankful that Uncle George is alive and just has a beat up arm.  It's scary to think what the outcome of this crash could have been.  Their lives were saved by their seat belts. I'm also thankful for seat belts... and super well made cars. 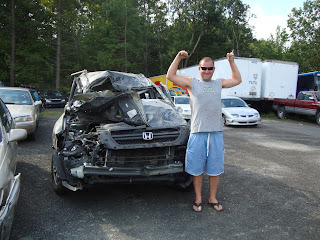 My dad, the surviver. 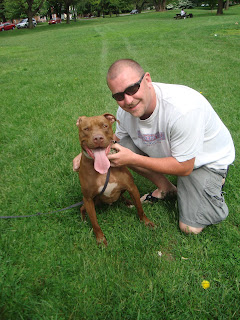 Thankful to have his face to smooch!
Posted by Corbin at 6:37 AM