So, a lot of you noticed my new collar in yesterday's post!  I actually got TWO new collars!  Mom said they were supposed to be for Christmas, but she let me try them on.

First, the package came... which was SO fun.

My awesome new collars came from Sirius Republic and I also got a new leash to match my green collar!  I'm super bummed that I can't wear them until Christmas though... Daddy-o just LOVES the grey one with the skulls on it... I'll be wearing that one, along with my Giants jersey for the football games!

Also, check it out.  My pal Rudy is having a Holiday Contest!!! You have to write a Holiday poem to be entered!  I'm going to spend the rest of my day thinking about my poem... go visit him and enter!

Oh, AND!!!!!!! Maggie Mae got her snow delivered to her.  Now, Maggie Mae only lives through the woods from me... so she's not that far away.  And I didn't get ANY snow.  Now, I think Remington is playing favorites because Maggie Mae is a Vikings fan and I am a Giants fan and the Vikings and Giants play this weekend.  I'm just saying... that's the only way to explain why SHE got snow and I DIDN'T!!!

And, one more thing, Frankie thinks I should run for Blogville Beautification Secratary instead of Secretary of Handsomeness.  I think I can live with that!  What do you think?  Or does it sound too girly...?  Because, I'm a dude... not a chick.  Maybe I should be incharge of military actions instead... I already have a camo shirt. 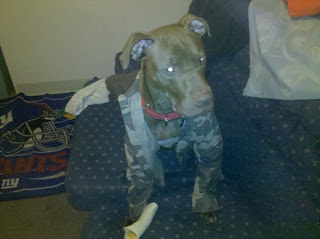 Later Dudes!
Posted by Corbin at 8:03 AM