It was just a few short weeks ago that we were preparing for the worst.  Corbin’s health was rapidly declining and his ability to get around was becoming increasingly harder.  We were crushed, frustrated and feeling absolutely helpless as we struggled with a huge quality of life decision. 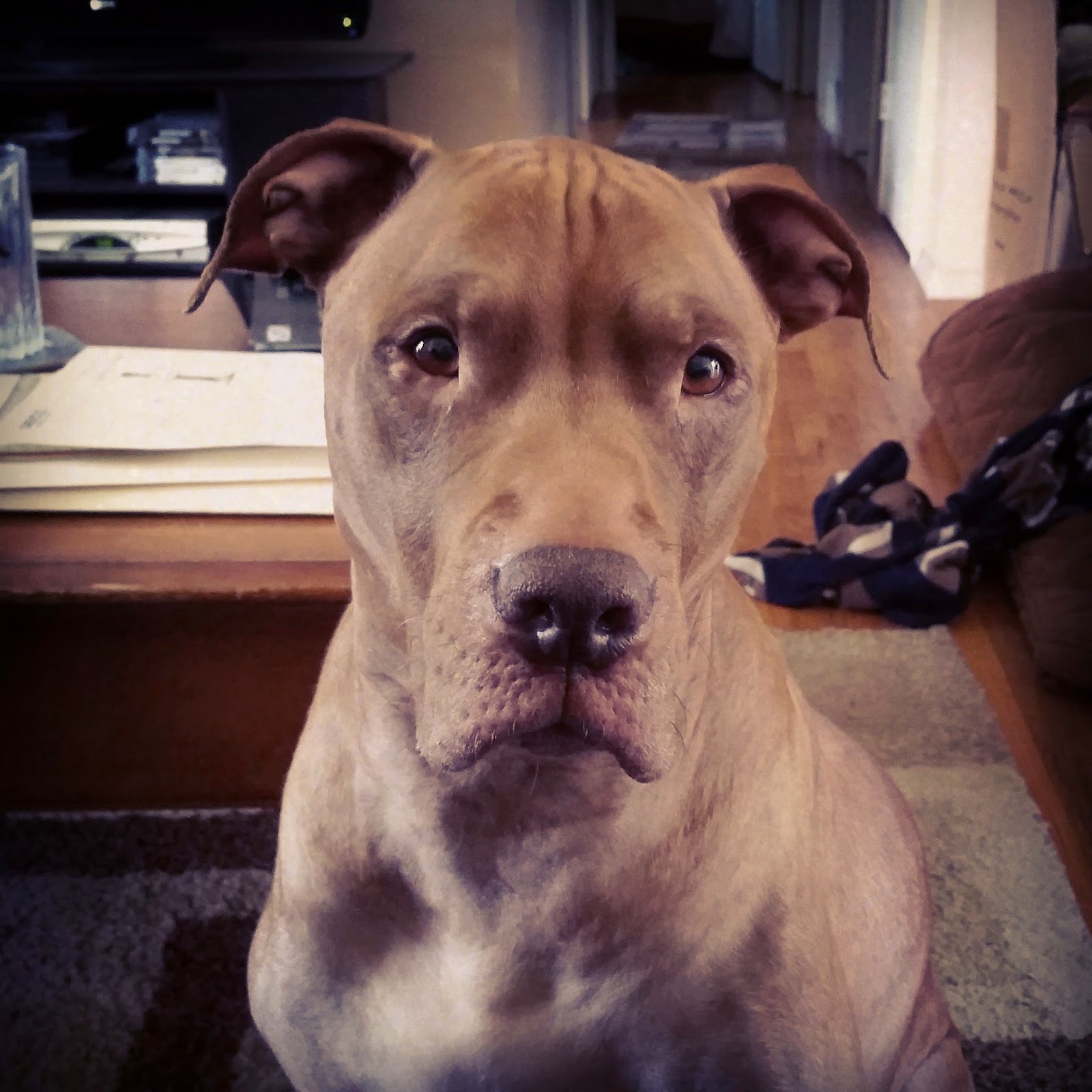 We decided to take it one week at a time.  If we went by his progress, or lack thereof, day by day… we probably would have chosen to end his horrible suffering… and yes, he was suffering.  But, we chose to plow through his bad days, comfort him during his 3am screaming fits of pain and do the best we could to make him as comfortable as possible while hoping for a light at the end of the tunnel.  It was a gruesome couple of weeks as we weaned him off of the prednisone and waited to see if a new drug would help.  We were so discouraged and watching him live in pain was more than we could bare.  I even had a heart to heart with him one night when he scrambled onto our bed and plopped all 75lbs of him on my chest.  I told him he had to let me know when it was all too much for him… when he was ready to let go.  He replied with an insanely fast tail nubbin’ wag and countless licks to my face.  I knew he was still fighting and willing to wait out some new treatment plans.  So, we did.


Dr. Mike started Corbin on some new anti-inflammatory drugs and muscle relaxers.  We decided to schedule a consult with a chiropractor.  At this point, we were desperate.  Last Wednesday, we met with Dr. Gunderson, a local vet who specializes in rehab therapy, including chiropractic adjustments and acupuncture.  She spent so much time with us, going over his crazy medical history and trying her best to understand what we’ve come to know as Corbinitis. 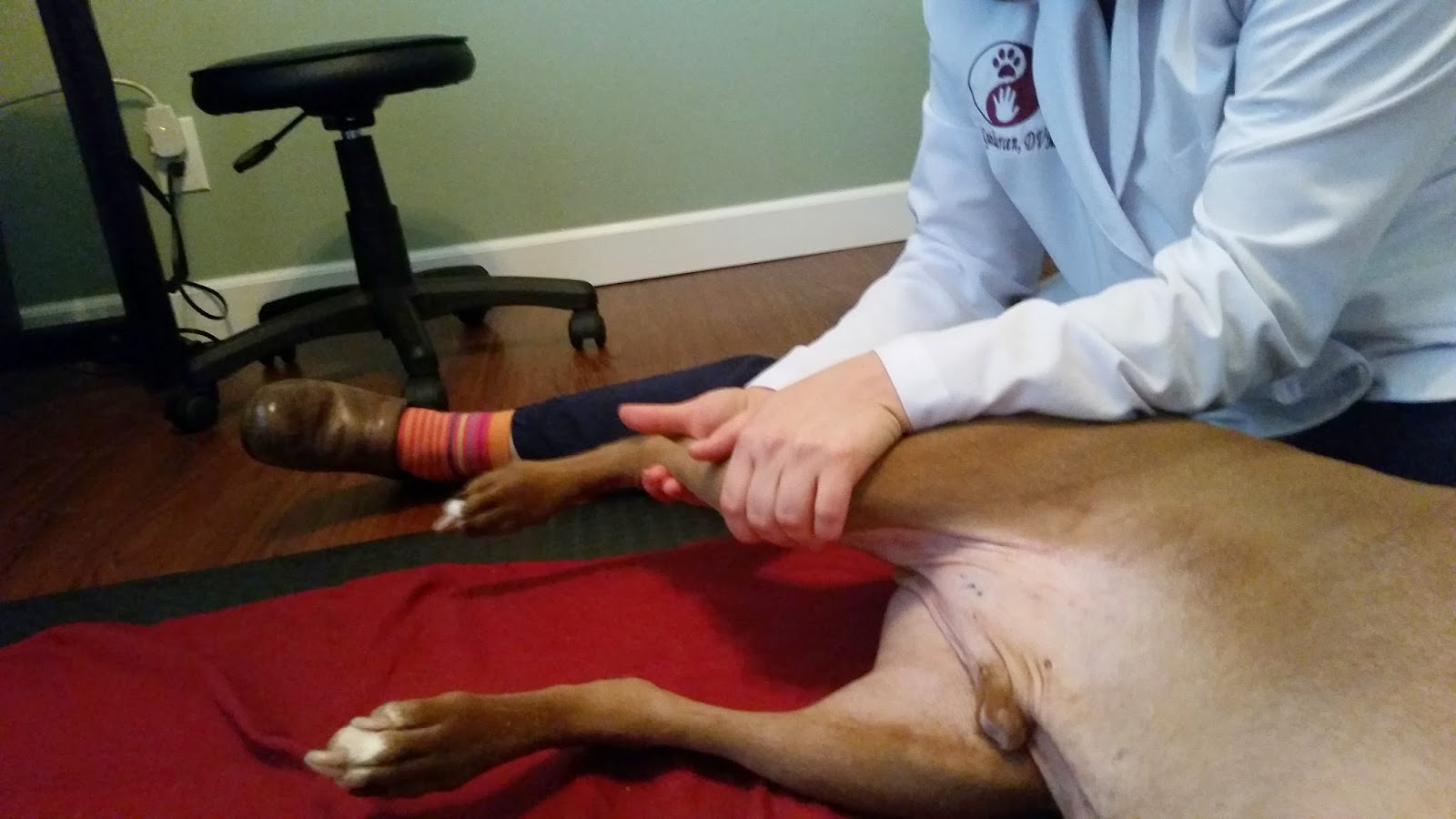 She did a full exam on Corbin, feeling every inch of his body.  She found that his Iliopsoas Muscle, the muscle that connects from his femur to his spine, in his right hind leg was extremely tight and she could feel it spasm under her touch. Oddly enough, 2.5 years ago we brought Corbin to a neurologist.  The only place Corbin expressed pain during his exam was when the neurologist felt that muscle.  During his MRI, an orthopedic did a full work up on him and said all was good with his legs, so the neurologist dismissed the thought of this muscle being an issue.  Well, looks like it is the issue.  We’re not sure yet if it is the primary source of his pain or secondary to another issue, but it’s a place to start. 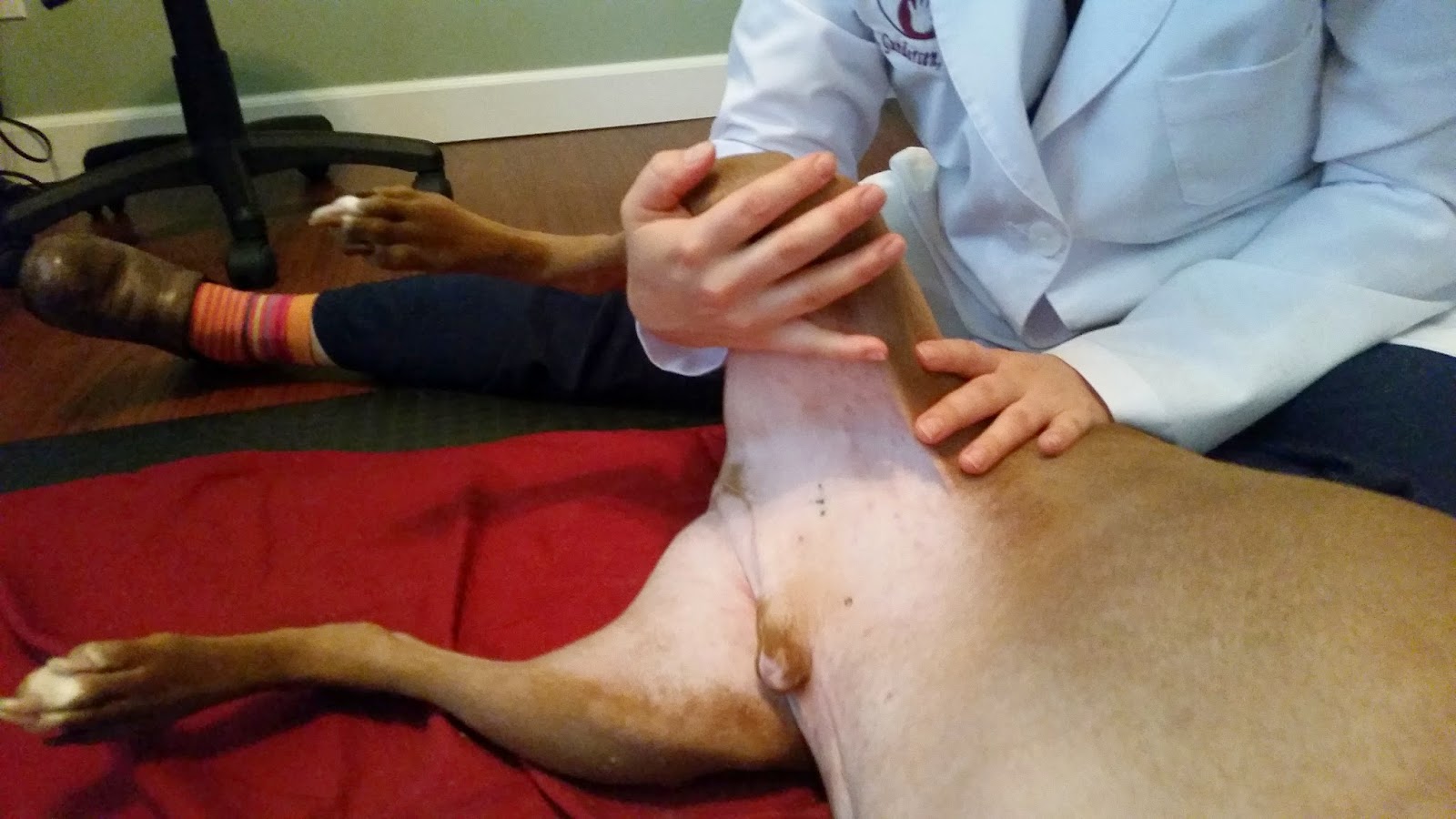 Dr. Gunderson adjusted almost every joint in his body.  She joked that she usually writes down which joints she adjusts, but for Corbin, the list would be much shorter if she wrote down which joints she did not adjust.  She taught me how to do some stretches with Corbin that will help stretch out that tight muscle and she sent Dr. Mike detailed notes on our visit and her recommendations.  Together, Dr. Gunderson and Dr. Mike are working on a treatment plan that will include continued chiropractic work and cold laser therapy.  We saw Dr. Mike the Thursday after our appointment and he was shocked with the amount of progress we had made.  Not only was his deteriorating paw healing up really well, but he was actually using his feet much better and not presenting as flat footed as he has been. Even Dr. Mike admitted that he didn’t think the pads of his feet were going to recover, and by some miracle they’re almost fully healed.  Same thing with his flat footedness... we didn't think he would perch up on his feet again, but he was. 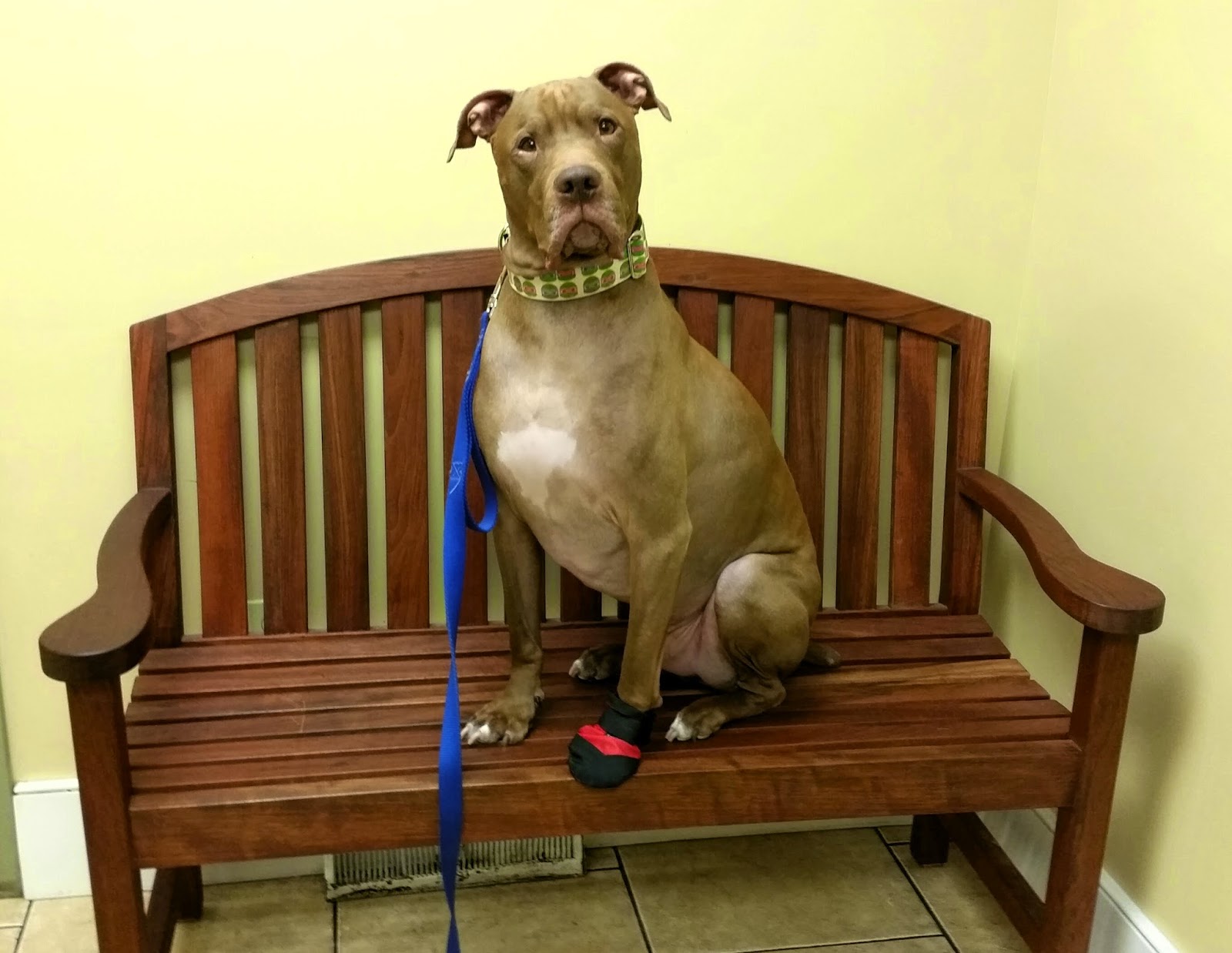 After our appointment with Dr. Mike last Thursday, we started Corbin on nerve blockers.  His 3am screaming fits have stopped and Amelia is very happy to have a playful Corbin around again.  The transformation in Corbin’s overall health, appearance and personality is just astonishing.  And, he’s starting to grow some of his fur back on his chest and belly that he had been slowly losing –most likely due to his prednisone intake. 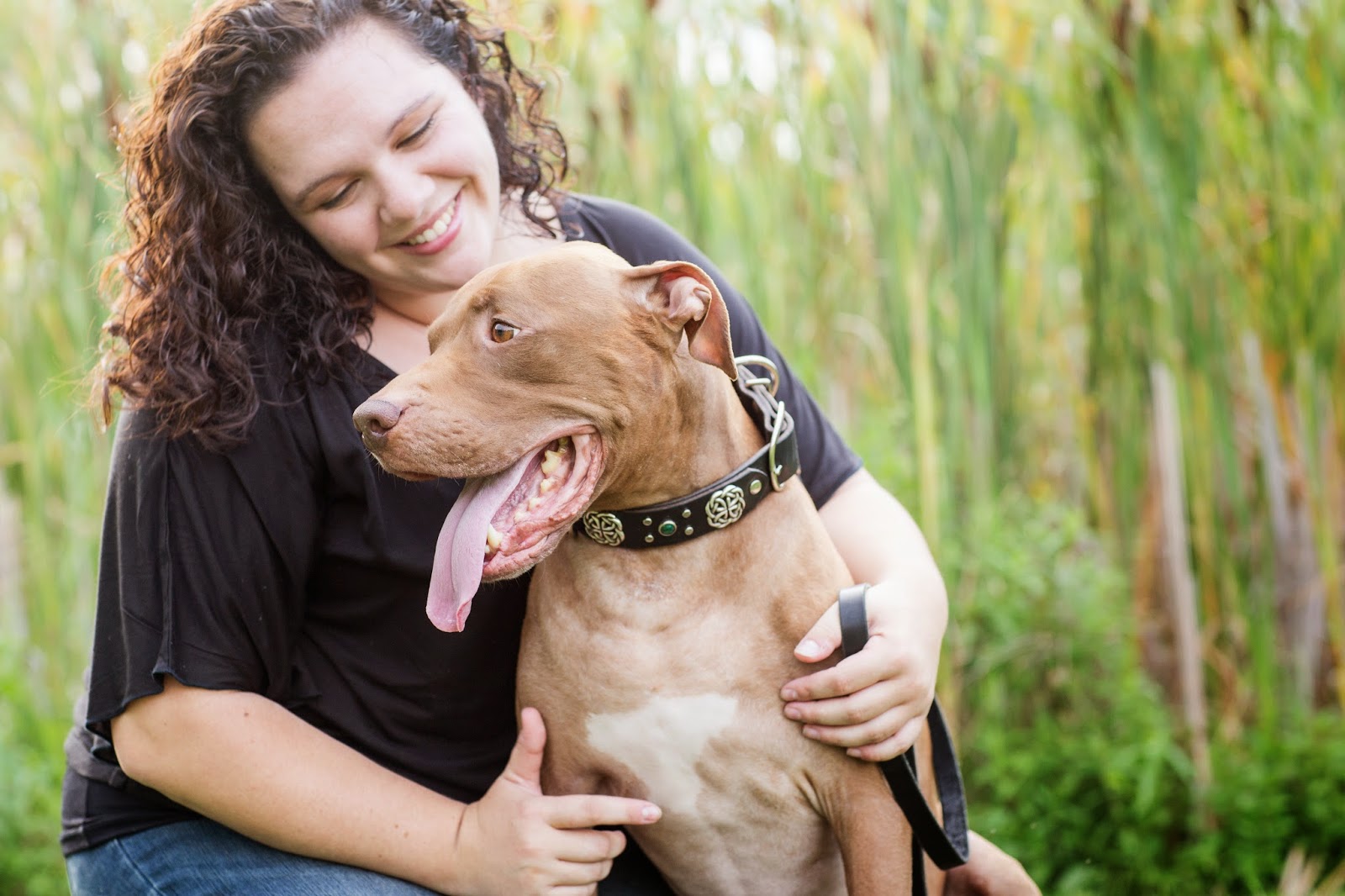 Photo by Tracey Buyce Photography
As tough as those few weeks were to watch him in pain, I’m glad we stuck it out and put our trust in Corbin and our wonderful vets.  Happy tears would be such an understatement. I’m so hopeful that we will be able to get his pain managed and allow Corbin to live a happy life for a bit longer!  Thanks for all the good thoughts, vibes and prayers you sent our way.  They were deeply felt and it clearly worked!  He has a great group of supporters in his corner and we’re so thankful!
Posted by Corbin at 7:44 AM