The Trials & Tribulations of Being a Foster Mom...

This post is from Corbin's mom... Corbin will be back tomorrow.

I was reading through all the blogs we follow yesterday... I usually open a bunch at once in one window and tab through them.  I was clicking away, excited to read about Mayzie eating grass (something Corbin does for the heck of it, never over an upset tummy), the artshow Pip's mom went to, the crazy antics of Frankie... all of our friends always have fun, funny, interesting things going on.  Then one blog caught my eye... titled Wanted, Unwanted.  My eyes quickly went to a fimiliar word in the preview for the post... "Oreo." 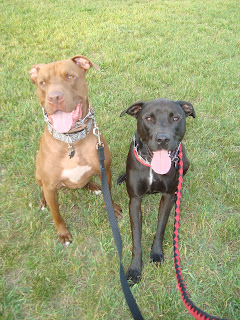 This post was by 24 Paws of Love... one of the first blogs that started following us last year when we started blogging, and one of the first blogs we started following. After reading their post and the comments others had made, I was honestly in tears... I write the blog and read the comments everyone leaves, but I guess I never really imagined it ever affecting anyone. I know I get attached to the blogs I read, but I guess this is the first time it's come across that someone has attached themselves to something I wrote, something going on in our lives. Their blog post was about how dogs feel when they get returned and how Oreo's story had really touched them... I was responding to their post when I realized my comment was longer than most of my blogs. So I decided to write a post about this as well.

I hate the bouncing Oreo has done... she is the first of my fosters to ever be returned. The hardest time she has had was when she came to my house. She was a nutcase, whining, crying, pacing... her family handed her over to me in an empty parking lot and drove out of site without a second look back... I felt so awful for her and had no idea how to help her... after two weeks I finally called a behaviorist that works with my rescue... She helped out so much and we have had very few issues with Oreo since.

The first home she went to was when we were on vacation, and when they returned her, I even said to their face that I would have never let her go home with them. They were push over people who wanted a perfect dog. I know they were explained Oreo's issues because I took 10 minutes out of my vacation to talk to them on the phone. I wanted to make sure they understood Oreo's issues. He assured me over and over again that they have had many dogs and they understood there would be an adjustment period and they could handle anything that came their way. 24 hours later, they called Homeward Bound and asked when they could meet someone to bring her back. She was barking at their neighbors and pulling them around on the leash. Simple fix. She doesn't bark at my house... and I walk her and Corbin together with no issues. Take control, how hard is that? They didn't want to bother with a behaviorist. I was glad she came back that time... I didn't want her staying with that family. I brought Corbin with me when I met them at our store to take her back... they watched me walk out with both dogs behaving and walking next to me on a leash.

The second home was my fault... they fell in love with Oreo and I thought that meant what they said - that they'd do anything and everything for her, she was THEIR dog.... and they didn't. They returned her after 10 days. They had a nice fenced in yard, they could handle Oreo on the leash... but she barked when people came to the house. Really? Isn't that what dogs are supposed to do? Didn't I explain to you that she barks when people come to the house? She has a deep scary bark but she's harmless? They couldn't control her when people came over... she jumped on them. I hated myself the day I got that phone call. Poor Oreo was losing another loved one. I felt a little better when they returned her... she never looked back, happy to be back with someone who knew how to take care of her. She knew she could relax... and relax she did. She slept for 3 days when she got back to our house... waking up to eat and go outside.

Then came the single mom and her daughter... a home I thought was exactly what Oreo was looking for, similar to the home she originally came from. While I was angry when the woman called crying and upset that she couldn't handle Oreo's strength... I knew where she was coming from and understood why it wasn't going to work out, nor would it be a safe environment for Oreo. I'd be so angry with myself if I convinced this woman to keep her and she got loose and hit by a car. I knew this was for the best for Oreo. So, back Oreo came... this time it was a little harder because she loved that little girl...

It broke my heart every time she left, and even more every time she came back. I explained to each family over and over again... Oreo is a nervous dog, she needs an alpha owner, someone who will give her rules, guidelines, boundaries... someone who is going to make her feel safe. If you take control, she'll walk on a leash, she'll refrain from barking at anything and everything, she'll settle down in the car. Yes, she'll need some time to adjust... but you NEED to give her that time. And what broke my heart more... was the fact that I felt like I was letting Oreo down each time she came back.
But nothing has broken my heart more than yesterday. Last Friday an application came into the rescue for Oreo... everything looked great on paper - had a large strong pit bull with issues previously. I didn't get my hopes up, but I was hoping they'd come to the clinic so I could meet them and talk to them about Oreo. They came, they fell in love... they adopted. Over and over and over I told him she'd been returned, these are the reasons why... this is what she needs, this is what will help her, she needs time to adjust. They came to pick her up on Sunday and my boyfriend told them the same things... over and over. "Oh yea, I understand, poor dog has been through a lot. No worries Oreo, this is your forever home. We won't give up on you"

Monday afternoon, my cell phone rings. I was at work, so I couldn't answer but I knew it was Oreo. Listened to the message, called back. Oreo is whining and pacing non stop, she's going nuts in the car, she got loose on me at a gas station and ran up to people barking, she got out of the yard, but eventually came back. I was shaking. I was angry, upset and a part of me wanted to just give up on him and take Oreo back. I calmed myself down and offered our behaviorist’s number... explained the whining and the pacing is because she misses what she's related to as her family..... me. Corbin. Adam.

What do you do when your foster has taken you in as her family? It wasn't that her new family wasn't good enough, or that they were like the others... she missed her family. She wanted to go back to us. I explained to him that these were manageable issues... and that if he called the behaviorist, she'd be able to help tremendously. I could hear in his voice that he wasn't ready to give up... But I remembered all too well how wearing that whining was when we first got her. So I left him with Nancy's (behaviorist) number and it sounded semi hopeful... a part of me was still afraid I was going to go home to find her in our back yard, waiting. I ended the conversation and hung up the phone and cried. My poor Oreo... was she ever going to be able to accept another transition? Was she ever going to be able to accept another person as her family?

One of the other rescues girls who has been doing this a lot longer than me gave him a call also. She was much calmer and less emotional than I was... so she seemed to do more explaining than I could at the time. He was going to call Nancy and set up a time for her to help. I hope it does.

I haven't been doing rescue for long, but I sure have learned a lot about people... when they're willing to try and when they've put up that wall and nothing you can say will change their mind... when rescue is better for a dog than the situation their in... when people have stopped caring, they start neglecting. I knew with each of Oreo's past adopters... nothing I could say would change their mind... and if they kept her, they would resent her and I didn't want that life for her -or any dog for that matter. And I keep comfort in knowing, she has a safe place to come back to.

I wasn't going to mention anything on the blog about Oreo being adopted, again. I was afraid if it failed, I just looked like a horrible foster mom who gave her troubled foster dog to anyone. But I read the post by 24 Paws of Love and realized what the blog is for... it's for fun, advice, information, adventures, connections, friends, and support. We know keeping Oreo isn't an option for us... Corbin's an only dog kind of guy and it wouldn't be fair to lug Oreo to the lake every weekend because she'd have a heart attack on the boat... and it wouldn't be fair to leave her behind every weekend either.

I can only hope that this is it for Oreo... she found someone who will work with her, understand her. I hope she has enough left in her to trust and love someone else.

That's my rant. Corbin will be back tomorrow with his usual upbeat posts :o) 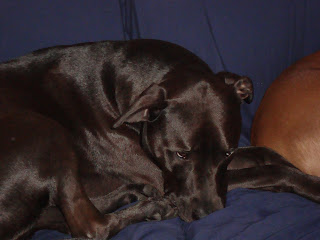